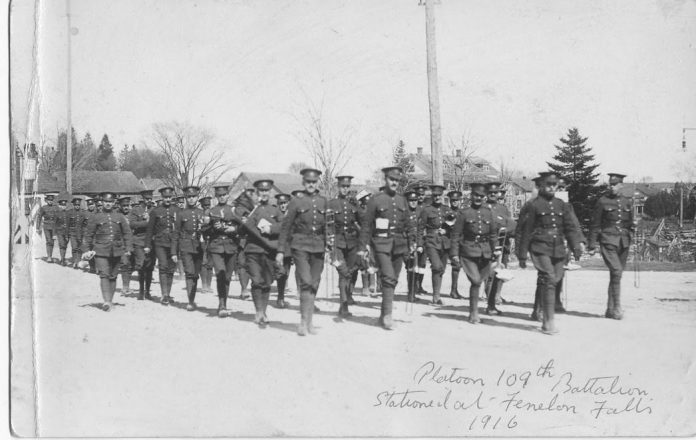 This past weeks anniversary of Vimy Ridge triggered many memories for people, mostly of loss and what could have been. For some a reminder of a father who never came home.  A father that you got to know through the memories that your mother had but was trying to forget as she struggled being a single mom in the 1920’s.  For some it was the reminder that your dad did come home but was not the same, happy go lucky person.

In the spring of 1916, 1050 men said goodbye to their loved ones at the train station in Lindsay.  Over 200 did not return.  The Victoria and Haliburton 109th Battalion was made up of adventurous, patriotic men from the area.  They had many skills which were needed for the war effort.  Expertise in cutting and climbing trees among them.  The group went over believing after having trained for months in the area that they called home they would be fighting beside one another.  Once they got overseas they were broken broken up as reinforcements for other existing battalions. One of those men was William Wesley Arscott. 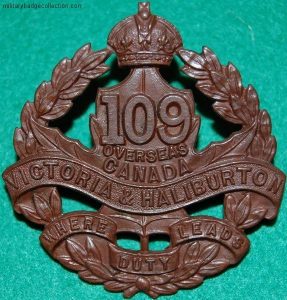 Vimy Ridge’s devastation was felt in the very towns they had left months earlier. The survival of a soldier from the war, which saw devastation unimaginable by today’s standards was a joyous occasion.  But for some families it brought with it ramifications that were felt by the next generation.  For the Arscott family on the Sturgeon Point Road one soldiers return was a life long reminder of the devastation that grew beyond the European borders.

The 1918 flu pandemic was deadly.  It infected 500 million people across the world and resulted in the deaths of 50 to 100 million, making it one of the deadliest natural disasters in human history. Most influenza outbreaks disproportionately kill juvenile, elderly, or already weakened patients; in contrast, the 1918 pandemic predominantly killed previously healthy young adults.  This increased severity has been attributed to the circumstances of the First World War. In civilian life, natural selection favours a mild strain. Those who get very ill stay home, and those mildly ill continue with their lives, preferentially spreading the mild strain. In the trenches, natural selection was reversed. Soldiers with a mild strain stayed where they were, while the severely ill were sent on crowded trains to crowded field hospitals, spreading the deadlier virus.

The Arscott family was happy to see their son and brother, William return home but he came home sick, very sick.

Kathleen was only a baby at the time of her uncle Williams return.  Her older brothers Victor, Harry and Howard were 5, 4 and 2.  They were busy, 2 of them would later take part in the war effort in World War 2 one of them in the famed Lancaster, flying in one of the only planes to survive the war and flown home to Canada after the war.

Kathleen got the flu from her uncle William.  She became very sick, her sister Gertie born 2 years later was able to walk before her.  Kathleen was left with a lifetime of crippling ailments and a bad back.

William died from the flu on Armistice Day 1918, the signing of the agreement that ended fighting on the Western Front.

The bravery and sacrifice of the brave men who left our gentle borders has not been forgotten.