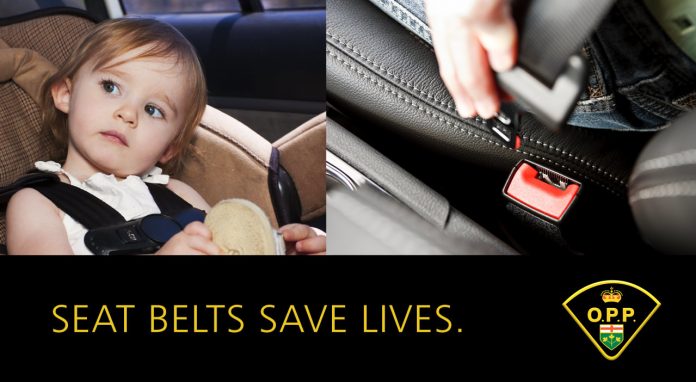 The City of Kawartha Lakes detachment of the OPP will be out this weekend and looking for people not wearing seat belts.  The campaign will run from Friday April 14, 2017 until Monday April 17, 2017.

“It only takes a moment to buckle up and it can save your life, or the life of your loved one. I commend the OPP for undertaking Seat Belt Campaigns. They are an important reminder that helps keep our roads safe. Please help prevent unnecessary tragedy by making sure everyone in a vehicle with you is safely buckled.”  says Marie-France Lalonde, Minister of Community Safety and Correctional Services.

Last year (2016) on OPP patrolled roads 45 people died who weren’t wearing seat belts when they were involved in a collision.

Officers will focus on seat belt law enforcement and education, conducting seat belt checks and raising awareness on the effectiveness of seat belts in saving lives in the event of a collision.

OPP are reporting a 20-year low and a steady decrease in seat belt-related deaths as they get set to conduct their Seat Belt Campaign over the Easter Long Weekend.

The OPP attributes the downward trend, in part, to its Provincial Traffic Safety Program (PTSP). The PTSP is a proactive, high visibility approach to traffic safety enforcement and education that focuses on lack of seat belt use and other high-risk behaviours that account for the majority of OPP-investigated deaths on roads, waterways and trails.

“The evidence that supports the effectiveness of seat belt use remains irrefutable. The odds of surviving or avoiding serious injuries in a collision are stacked against those who are not restrained in their seat. In exchange for the few seconds it takes to buckle up, you can cross this risk off the checklist of things that threaten your life on the road.”  according to OPP Deputy Commissioner Brad Blair, Provincial Commander, Traffic Safety & Operational Support.

Since its implementation in 2007, PTSP has contributed to significantly fewer traffic fatalities overall , police say. While seat belt-related fatalities have proportionately decreased through the success of the PTSP, unbuckled vehicle occupants continue to lose their lives.

Lindsay Street In Fenelon Falls Closed Due To Crash

Lindsay Street In Fenelon Falls Closed Due To Crash